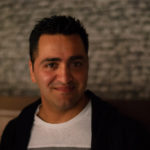 He started playing music (as an amateur) since he was 11 years old. He began with percussion instruments and since then he’s been a member of many bands, giving live performances on various events and festivals in Greece and abroad. In addition when he was 14 years old he began playing music at many nightclubs of his city (as a DJ), and 2 years later he began playing as a professional. Since then he’s played at many clubs and beach bars in: Greece, Cyprus, Germany and The Netherlands.

Furthermore, he has graduated from music school (6 years) and studied Music Technology and Engineering at a private school (Creations, 2 years). The last 6 years he plays music in the Netherlands at various clubs parties and events.